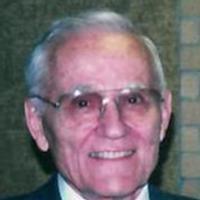 Our dad, Fred Hoesley, passed away on Sept. 12, 2016 at Rose Arbor Hospice of Kalamazoo. He was 98. Frederick Joseph Hoesley was born on Dec 23, 1917 in Crystal, ND, where he was raised. He graduated from the University of North Dakota, where he was a member of the Beta Theta Pi fraternity. After graduation, dad went to work for Boeing in Seattle, WA. He was briefly in the Army for flight training on the P-17 and trained new recruits. He was a captain in the Army Air Corp until he was honorably discharged and returned to Boeing as necessary personnel during WWII, where he participated in making improvements to the B-17 and developing the B-29 Flying Super Fortress. In the summer of 1943, our mom, Roberta Jeanne Purviance, also from Crystal ND, eloped to marry dad on Sept 4, 1943. They resided in Kent, WA for several years, living on Star Lake. In 1949, mom & dad moved back to ND to live in Fargo & raise their family. Dad worked as chief underwriter for the Federal Housing Administration and was diligent about supervising properly built structures. He designed and built his own home. He retired from the FHA in 1975. He was a member of the Sierra Club, Knights of Columbus & Holy Spirit Catholic Church. Dad loved aviation, but also enjoyed designing and building houses, carpentry, Christmas & chocolate cake. He proudly made cinnamon rolls from scratch. During the Christmas holidays, working with parishioners, mom & dad helped many families to make sure that their Christmas experience was special. Dad lived the last eight years at Friendship Village, where he was loved and well cared for. He especially appreciated visits from family members. Mom preceded dad in death on Oct 16, 2005. He was also preceded in death by our sister Nancy Clare Johansen on April 14, 2005. Surviving are five children: Terry Holt (Tim) of Des Moines IA, Jeanne Rowe (Fred) of Portage MI, Fred Jr of Seattle WA, Cindy Buch of Portage MI and Tom Hoesley (Debra) of Fargo ND. Dad & mom had thirteen grand-children: Jenny, Adam & Jeff, Anna, Simone & Tom, Bryan & James, Austin & Adrianne, Chrissy, Tommy & Carl. Mom & dad moved to Portage MI in 1998 to be closer to family members. There are 7 great-grand-children. In lieu of flowers, the family asks that you donate to St Therese of the Society of the Little Flower. Friends will be recieved 10am -11 am Wednedsday September 21, 2016 at St. Catherine of Siena Catholic Church where a Memorial Mass will be celebrated at 11 am with a luncheon immediatlely to follow. Arrangements by Redmond Funeral Home, 4100 S. Westnedge Ave. Kalamazoo, MI 49008 (269) 343-6156. www.redmondfuneralhomes.net
To order memorial trees or send flowers to the family in memory of Frederick Joseph Hoesley, please visit our flower store.