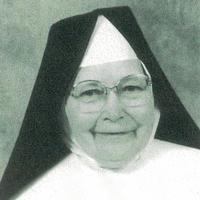 Hennig, Sister Marciana CSJ of Nazareth, MI. Passed away on December 4, 2016. Sister Marciana was born on October 7, 1914 in Detroit, MI. The daughter of Albert and Anastasia (Ziemann) Hennig. Sr. Hennig was a member of Congregation of the Sisters of St. Joseph since 1929.  Sister was preceded in death by her sister; Sister Maurice Hennig CSJ. Surviving are several nieces and nephews, and the Congregation of Sister of St. Joseph. Friends will be received at Nazareth Center Thursday December 8, at 4 pm.  A Vigil service will be held Thursday 7 pm in Holy Family Chapel. Mass of Christian burial will be celebrated Friday 10:30 am. Father Robert Creagan celebrant.  Interment will be in Gate of Heaven Cemetery. Memorials may be made to the Sister of St. Joseph. PO Box 29 Nazareth MI, 49074. Arrangements by: Redmond Funeral Home, Kalamazoo.
To order memorial trees or send flowers to the family in memory of Sister Marciana Hennig, please visit our flower store.