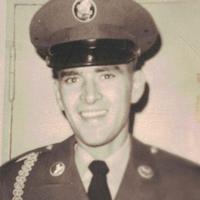 Robert E. Rorick of Kalamazoo passed away on December 24, 2016 at home with family. Robert was born on May 14, 1942 in Kalamazoo, Michigan, the son of Harold and Roseanna (Letsinger) Rorick. He was a U.S. Army veteran serving during the Vietnam Era. Robert was a member of St. Ambrose Catholic Church he owned Rorick Bro's Auto body and enjoyed fishing, hunting, gardening and tinkering with cars, but most of all he enjoyed spending time with his granddaughters. He was married to Lauri Ann (Wotta) on November 6, 1970 in Kalamazoo and she preceded him on January 4, 2008. Also preceding him in death are brother's Chuck, Ed and Walter; half sister Marjorie Papas. Surviving are one daughter, Lisa Lauri Rorick-Stewart; two granddaughters, Kelsie Sophia and Kenzie Ellis and their father Casey Stewart; brothers, Bernie, Dick, Joe, Harry; brother-in-law, Clyde Papas; several nieces & nephews. Family and friends will be received on Wednesday December 28, 2016 from 5-8 pm at Parchment Redmond Funeral Home 2300 East G. Ave. (269) 349-7735 where a rosary will be recited at 7:30 pm. Mass of Christian Burial will be celebrated on Thursday 10:30 am at St. Ambrose Catholic Church, Parchment. Fr. James O'Leary celebrant. Interment will be at Ft. Custer National Cemetery. Memorial contributions may be made to Kalamazoo Area Catholic Schools. www.redmondfuneralhomes.net
To order memorial trees or send flowers to the family in memory of Robert Ellis Rorick, please visit our flower store.