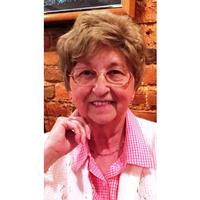 Barbara Elaine Dykens passed away May 9, 2017 at home surrounded by her loving family. Barbara was born September 24, 1934 in Kalamazoo the daughter of Frank and Georgia (White) Bentley. She was a member of St. Monica Catholic Church where she served as a Eucharistic Minister and was part of the homebound ministry. She blessed many people with her handmade rosaries. Barbara used her talents to create many treasured gifts from crocheting, quilting, scrap booking, and she was an amazing seamstress. She was employed by the Upjohn Company, as well as Westdale and Cain Real Estate Companies. The job she enjoyed the most was being a homemaker and caring for her family, grandchildren, and great grandchildren. On May 11, 1957 in Kalamazoo Barbara was united in marriage to Gordon A. Dykens who preceded her in death on Sept. 28, 2011.  Also preceding her in death were her parents; two brothers, Robert and Roger Bentley. Surviving are four daughters, Linda (Randy) Ptacek, Cindy (Keith) Benthin, Janet Dykens, Brenda (Philip) Kimberly, all residing in Portage; seven grandchildren; Lisa (Adam) Danapilis, Todd (Brianne) Ptacek, Rachel (Scott) Wilkins, Nickolis and Nathan Kimberly, Mandy Benthin, Kim (Jon) Hard ; seven great-grandchildren, Rebecca and Nolan Danapilis, Ayden Crooks, Jackson Wilks, Logan and Clara Mohler, and Ethan Hard. Sister, Gwenlyn Jane Becker of Three Rivers; brother, Richard Bentley. Friends will be received 2-4 & 6-8 pm Monday May 15, 2017 at Redmond Funeral Home, 4100 S. Westnedge Ave. Kalamazoo, MI 49008 (269) 343-6156 where a Rosary will be recited at 7:30 pm. Mass of Christian Burial will be celebrated 10:30 am on Tuesday at St. Monica's Catholic Church. Interment will be in Mt. Ever-Rest Cemetery. Memorial contributions may be made to Reverence Hospice. www.redmondfuneralhomes.net
To order memorial trees or send flowers to the family in memory of Barbara Elaine Dykens, please visit our flower store.