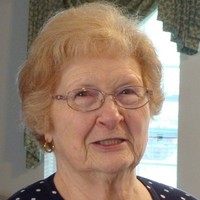 Carole J. Voissem of Parchment passed away Tuesday evening, February 18, 2020. She was born in Neenah, Wisconsin on October 4, 1929, the daughter of the late Gregory and Lorraine (Kloepfel) Pottner. On September 4, 1954, she was united in marriage to James F. Voissem, who preceded her in death in 1981. Surviving are her children: Christine (Melvin) English, Mark (Patricia) Voissem, Pamela (Edward) Adams, Jamie Belen, Paul Voissem, Kurt (Memory) Voissem, and Jeffrey (Laurie) Voissem; brothers and sisters: Donald (Sharon) Pottner, Sally (John) Swiechowski, Marlene (Vernon) Johann and Thomas (Barbara) Pottner and sisters-in-law: Carol Pottner-Nadolney, Arlene (Roy) Stephenson and Geri King. She is also survived by 14 grandchildren, 17 great grandchildren and 3 great great grandchildren and many nieces and nephews. She was preceded in death by brothers Greg Pottner and Bill Pottner, several in-laws, and 2 nephews. After raising her children, she entered the work force as a sales clerk at Ruby’s clothing store and as an election worker for Cooper Township. She was a member of St. Ambrose Catholic Church in Parchment and participated in just about every volunteer activity she could through the church, including blood drives, Meals on Wheels, food pantry, prayer line, Eucharistic minister, lector, bingo and parish council. She was a member of the Borgess Service League working at the gift shop in the hospital and also visiting patients with her cart of reading materials. She loved music, loved to dance, play cards, travel and just have a good time. She also enjoyed sports, especially football, baseball and basketball. A Mass of Remembrance will be held on Saturday, April 18, at 11:00 a.m. at St. Ambrose Catholic Church, 1628 East G Avenue, Parchment with a luncheon to follow at the church hall. A memorial visitation will be held prior at 10 am to 11am. Memorial donations in Carole’s memory may be made to Residential Opportunities, Inc. (ROI) of Kalamazoo. The family would like to thank the staff and other employees of Alamo Nursing Home for the excellent care and kindness extended to our mom during her last few years; they treated her like family and became part of ours. Arrangements by Parchment Redmond Funeral Home, 2300 East "G" Ave. Parchment, MI 49004 (269) 349-7735. www.redmondfuneralhomes.net
To order memorial trees or send flowers to the family in memory of Carole Jean Voissem, please visit our flower store.