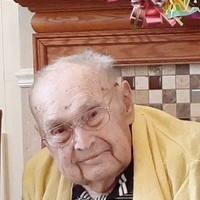 Charles J. Kirin passed away Wednesday, March 11, 2020 at Brookdale of Portage. Charles was born February 29, 1924 in Chicago the son of Matthew and Anna (Miskulin) Kirin.In April of 1943 he was inducted into the Army Corps of Engineers and spent two years oversees, making the Utah Beach landings in Normandy on D+3 with the 626th Engrs. At the close of WW II he was awarded the ETO ribbon with a silver battle star representing five major battles after which he was assigned to duties in the Philippines until his discharge on Dec. 23, 1945. Charles retired after 45 years from R.R. Donnelley & Sons Commercial Printing in Chicago as a video compositor. He was a member of St. John XXIII Catholic Church in Ft. Myers, FL and he was active in many organizations at Seven Lakes in Florida and the Croatian Fraternal Lodge #32, he was a life member of the Gardeners of America and a life member of the VFW Post #10097 of Ft. Myers Beach, Suburban Men’s Garden Club, Chicago-land Daylily Society. Charles was very interested in horticulture which influenced his becoming a hemerocalis judge and also a Flower and Vegetable show judge. He enjoyed traveling, bird carving, golfing, Bocce, singing and dancing, card playing especially bridge, and he was an amateur actor and comedian. On May 24, 1947 in Chicago, Charles was united in marriage to the former Mildred Kubalek who preceded him in death on April 1, 2007, after 60 years of marriage. Surviving are two daughters, Christine (David) Chadderdon of Kalamazoo, Diane (Terry) Murdock of Overland Park, KS; six grandchildren, Dan (Kyle) Chadderdon, Rachel (Daniel) Bair, Christyn (Tony) Zins, Jeff Murdock, Kate (Carl Skarbek) Murdock and Tim (Kathleen) Murdock; five great-grandchildren, Andrew, Claire and Evan Zins, Mara Bair, and Owen Murdock. Mass of Christian Burial will be celebrated 1 pm Friday March 20, 2020 at St. Thomas More Catholic Church. Memorial contributions may be made to Hospice of Southwest Michigan. Arrangements by Redmond Funeral Home, 4100 S. Westnedge Ave. Kalamazoo, MI 49008 (269) 343-6146. www.redmondfuneralhomes.net
To order memorial trees or send flowers to the family in memory of Charles Joseph Kirin, please visit our flower store.