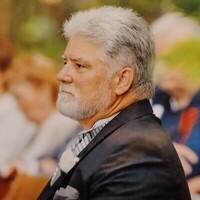 Charles Riddle, Jr. "Chuck" 71, passed away peacefully at his home in Kalamazoo, MI on December 28, 2021 after a 16-month battle from CMML. He was born and raised in Kalamazoo by Charles E and Lauretta Riddle and was preceded in death by them and his younger brother, Larry (1979). He graduated from Parchment High School in 1969 and immediately entered the United States Army. While stationed at Fort Bragg, NC he married his high school sweetheart Deborah E Smith. Upon his discharge from the Army he continued to serve in the National Guard for 29 more years before retiring. Chuck was a very busy man and wore many hats, he worked for James River (Graphic Packaging) starting in ’72 and retired in 2017 after 47 years. A Captain in the Cooper Township Fire Dept for 33 yrs., a paramedic for Mall City Ambulance, he was a mentor and coach for Youth Opportunities Unlimited, played softball & paintball, he loved riding his Harley, doting on his grandkids and dogs. He believed strongly in his country and would have given his life to help (his unit went to Iraq in 2003) while he at that time was diagnosed with prostate cancer. He was a lifelong member of the American Legion serving as Commander of the Kalamazoo post 36, also a lifer of the VFW in Comstock. He loved his brothers (Outlaws 13) in the reserves, and in the Warthogs, they are called his Brothers in crime. WFFW. Chuck had two children Elaine and Chad. Chuck leaves behind his wife of almost 51 years Deborah, his Daughter Elaine (Michael) Negus, Son Chad, three grandchildren Benjamin, Abigail and Zoe. His two sisters Terri (Kevin) George and Laura (Rick) Barta. In lieu of flowers, the family request memorial contributions be made to his wife for college funds set up for his three grandchildren or The Salvation Army Church 1700 S Burdick St Kalamazoo Mi, 49001. Visitation and Service at Redmond Funeral Home 2300 East G Ave Parchment. Visitation Monday January 3, 5-7 pm and Service Tuesday January 4, 11 am followed by Military Burial at Fort Custer Promptly at 1pm. A light luncheon at 2 pm will be held at the VFW in Comstock 5990 E Michigan Kalamazoo 49048. www.redmondfuneralhomes.net
To order memorial trees or send flowers to the family in memory of Charles Edward Riddle Jr., please visit our flower store.