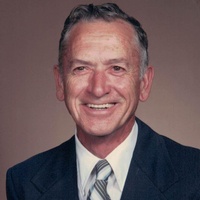 Passed away Wednesday January 9, 2019 at Plainwell Pines Nursing Home. Robert was born July 23, 1926 in Wayland the son of Howard and Helen (Butine) Conrad. Bob was a U.S. Army veteran serving in WW II.  Robert retired from Cadillac Overall Supply. And was a member of Knights of Columbus #1616 and the Antique Car Club. On September 17, 1949 in Kalamazoo Robert was united in marriage to the former Donna Yvonne Walker who preceded him in death on September 27, 2018. Also preceding him were daughter, Rebecca Hahn; granddaughter, Michelle Vergon; two brothers, Richard and Howard Conrad; five sisters, Harriett Ubbes, Jean Kinney, Maxine Titus, Lois Clemons, Helen Conrad. Surviving are four children, Thomas (Mindy) Conrad of Salmon, ID, Susan (Roger) Stowe of Louisville, KY, Christine (Daniel) Thompson of Plainwell, Janette (Jim) Hunt of Delton; son-in-law, Robert Hahn of Allegan; nine grandchildren, Jason, Erin, Iris, Colin, Jared, Rachel, Anna, Elyse, Lewis; five great-grandchildren, Hailey, Emma, Mason, Cooper, and Owen. Bob and Yvonne Conrad were married for sixty-nine years.  Anyone who spent time around Yvonne in her later years will remember how she often summed up her life’s experience by saying the best thing she ever did was marry Bob.  It’s hard to think of one without thinking of the other.  Bob was drafted into the US Army when he turned eighteen while still a student at Kalamazoo Central High School.  A severe case of pneumonia left him hospitalized, and unable to ship out with his unit to Europe during World War II.  He served the majority of his army years as a motor pool sergeant at Ft Custer in Battle Creek.  After the war he obtained a private pilot’s license and never lost his passion for flying or his interest in anything to do with aviation.  One of his fondest memories in recent years was a flight in an open cockpit Stearman Biplane, where he was able to again get his hands on the stick and fly.  Bob and Yvonne loved to travel and enjoyed many years touring the country in their motorhome.  They eventually found a winter’s home on the estuary of the Manatee River in Florida where they made lasting friendships with other retirees.  Unable to sit still, when not fishing or playing golf with his friends, Bob could be seen riding his bike through their tropical neighborhood looking for someone to help.  He loved tinkering and fixing things, and continually lent a helping hand to any project. He and Yvonne were proud of their five children and adored their ten grandchildren, and five great grandchildren.  They especially enjoyed weekends with family and friends at their Portage Lake home.  Bob was a gentleman and was loved by everyone he met. Friends will be received 5-7 pm Friday January 11, 2019 at Parchment Redmond Funeral Home. Mass of Christian Burial will be celebrated 1 pm Saturday at St. Mary Catholic Church, Kalamazoo. Entombment will in Mt. Olivet Cemetery. Memorial contributions may be made to Kalamazoo Humane Society, Loves & Fishes or Disabled American Veterans. Arrangements made by Parchment Redmond Funeral Home 2300 East G. Ave. Parchment, MI  49004 www.redmondfuneralhomes.net. Military Honors provided by Otsego VFW Post 3030.
To order memorial trees or send flowers to the family in memory of Robert Hugh Conrad, please visit our flower store.