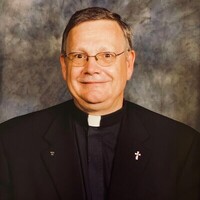 Deacon Edward Joseph Feltes passed away Sunday February 14, 2021, the feast of Saint Valentine, at his home surrounded by his loving family. Deacon Edward was born July 11, 1955. He was raised in West Chicago, Il on Sonny Acres Farm. He was the 8th of 9 children of Victor and Ramona (Nagel) Feltes. There he had the opportunity to learn about farming and hunting. He was a Scout Leader, and also became a skilled carpenter which was evidenced by the amazing work he did in their Kalamazoo home. Deacon Edward moved to South Bend, Indiana to attend the University of Notre Dame, graduating in 1981 with a degree in Business Administration. He met his beloved wife Jessica while in South Bend. They were united in Holy Matrimony on August 8, 1981 at the Basilica of the Sacred Heart, Notre Dame. Deacon Edward then worked for General Electric for many years as a financial analyst. Later he gained a CMA certificate. GE took Deacon Edward and Jessica to Clarendon Hills, Il; Spokane, Washington; Utica, New York and, Syracuse New York before moving to Kalamazoo, Michigan. They were blessed with the addition of their son Christopher, while in Spokane. In Kalamazoo, Deacon Edward eventually set up his own consulting practice for many years. Christopher later joined Deacon Edward in his business for several years in Kalamazoo. Deacon Edward’s faith was always important to him wherever he went. It was often practiced quietly, with little fanfare. It seemed like he had a connection with Jesus, as one carpenter to another, working quietly at building God’s kingdom, including as a 3rd order Knight of Columbus. Deacon Edward felt a call to enter the diaconate training program in the Kalamazoo Diocese and spent seven years going through the intense training to become a deacon (9-8-2012). Once he was ordained, he set about practicing his faith by serving others in St Catherine’s Parish (Portage), preaching, teaching, serving communion, assisting at weddings and baptisms, visiting the sick and the home bound etc. He continued to answer that call until his health no longer allowed him to do so. Even while under hospice care he never stopped offering blessings; prayer, holy water and blessed salt for anyone who visited, regardless of where they were in their faith walk. He loved them all. Deacon Edward is survived by his beloved wife Jessica and his son, Christopher; his brothers Larry (Anne) Feltes, Jim (Carol) Feltes, Chuck (Sue) Feltes, Richard (Anita) Feltes, Bob Feltes, and Tom (Ellyn) Feltes; his sister Joan (Jim) Herrmann; 62 nieces and nephews and 42 great nieces and nephews. He was preceded in death by his parents and four children; Francis, Steven, Elizabeth, and Meagan; his sister-in-law Mary Feltes and nephew Paul Joseph Herrmann. Friends will be received from 2:00-5:00 pm Sunday February 21, 2021 at St Catherine of Siena Catholic Church, 1150 W. Centre Ave Portage, MI. A rosary will be recited at 5:00 pm with a time of sharing to follow. Mass of Christian Burial will be celebrated at 11:00 am Monday February 22, 2021 at St Catherine of Siena Catholic Church. Interment will be in Hope Cemetery, 8501 South 8th Street Kalamazoo, MI 49009. Friends and family are welcome to join at the Cemetery. Memorial Contributions may be made to Kalamazoo Right to Life or St Vincent de Paul Society, Kalamazoo, to honor Deacon Edward’s passion for protecting life. Arrangements by Redmond Funeral Home, Kalamazoo.
To order memorial trees or send flowers to the family in memory of Deacon Edward Joseph Feltes, please visit our flower store.