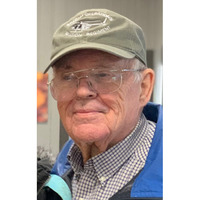 Attention all men, there is hope!!! Dennis R. Chaivre finally won an argument with Rose, his wife of 52 years. The shock of it all caused him to lose his sea legs, stopping his heart aboard the sailboat Enterprise on August 27, 2020. What had happened was… His son, Wyatt, needed a shipmate. Dennis said he was going. Rose said “Like hell.” And then they were on the boat, thus securing his triumph. He was destined for greatness from birth, entering this world on September 5, 1943, in the City of Detroit to his parents, Raymond (dec’d) and Judy (dec’d) Chaivre. At the age of two, his memory was so expansive that he was able to recall and recite “Twas the night before Christmas “in front of an audience at Michigan State University. After gaining his first two supporters, Kenneth (brother) and Jeannine (sister), he knew he was a natural born leader. As a seditious, independent child he was quickly enrolled into Jesuit training at the University of Detroit. He orchestrated a water ballon drop that met the intended target with impressive accuracy, and when caught, he proudly accepted his detention. He enjoyed this time so immensely that he spent many an afternoon sequestered in JUG (detention). For many years to come, he delighted in sensationalizing “The Happenings of the JUG.” So, in the inherent jokester fashion, a storyteller was born. He continued his escapades well into his college years, where he was commonly known to bring his fraternity brothers home to enjoy his mothers meatloaf. This was a personal favorite since he put ketchup on literally everything. Having so much fun (and poor academic application), he was strategically redirected into the workforce with a position at Consumers Power. Here, he continued his education and ultimately graduated with a BA from Wayne State University. It was during this time that he met his anchor, Rosalie, the love of his life. She was more than his equal in negotiations and human interactions. She consistently reminded him that opinions expressed by the husband are not necessarily those of management.. With all of this additional training, he was a prime choice for executive positions including: Kalamazoo Personnel Director, Vice President for Kalamazoo Jaycees, Personnel Director for Valley Plastic, and Vice President of Human Resources for Gerland’s Corp. He continued his education and obtained his MBA with a concentration in Human Resource Management. Thereafter, he worked as a Senior Consultant at Craft-Barresi Consultants, Ltd as well as The Herrmann Group, Ltd. Also during this time, he fathered 11 passionate, determined children who take after him with their intelligence (Good looks go to mom, thanks mom). Dennis Chaivre will live on through his legacy of children, grandchildren, great-grandchildren… Get ready because this list is going to get long, so in chronological order: Children; Joffrey (Tena), Angelique (Stan), Jessica (dec’d), Desiree, Travis, Lynnette, Kyle (Virginia), Derek, Kurtis (dec’d), Wyatt, and Mary (Justin). Grandchildren; Alyxandria, Jackailyn, Cassidy, Stephen, Jessica, Alyssa, Melody, Joshua, Autumn, Christin, Katelyn, Rachel, Cameron, Annabella, Alexis, Joseph, Logan, Leah, Kurtis, Kayla, Rosalyn, and Klayton. As well as 4 Great Grandchildren with one more on the way. As noted above; He is also survived by his siblings Jeannine Mancinelli (Patrick) and Kenneth Chaivre (Kathy). The family invites those who wish to share memories, such as the infamous 1979 Fruit of the Loom fire, the 1993 “Oh S--- I missed the moose”, the March 2019 “what do you mean this is dog food?”, and the September 2019 “Yes, I’m all in – it’s my son’s money” poker game to join us on September 3, 2020 for 11:00am mass at St. Monica Catholic Church on 4408 S Westnedge Ave, Kalamazoo, Mi 49008. Please bring your own facial covering. Life and death are both challenging in this world of social distancing, limited capacity, and restricted services. In place of flowers, we ask that you consider donating funds to the family for the celebration of his life, funeral, and related expenses. A Venmo account has been established for this purpose: @RChaivre Ultimately, his last adventure on the sailboat Enterprise was so close to Heaven for him that he just crossed over. Nothing but smooth sailing now, Dad. We love you Arrangements by Redmond Funeral Home, 4100 S. Westnedge Ave. Kalamazoo, MI 49008 (269) 343-6156. www.redmondfuneralhomes.net
To order memorial trees or send flowers to the family in memory of Dennis Raymond Chaivre, please visit our flower store.