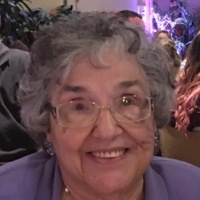 Passed away on Monday, September 2, 2019, at home. Esther was born on July 27, 1930, in Kalamazoo the daughter of Nicholas and Rose (Capitano) Cekola. On October 21, 1950 in Kalamazoo Esther was united in marriage to the Love of her life,  John C. Holmes who preceded her in death on September 7, 2007. Also preceding her was her daughter, Lisa Holmes; sister, Pauline Cekola; brother Joe Cekola; and two great-granddaughters. Surviving are seven children, Michael (Joanne) Holmes of Ohio, Thomas (Patti) Holmes of Three Rivers, Susan Riksen of Kalamazoo, Paula (Bryan) Brindley of Mattawan, John Holmes of Kalamazoo, Julie (Mike) Grunert of Florida, Mark (Patty) Holmes of Florida; five siblings, Mary (Vic) Bubelis of Illinois, Janet Paynter of Kalamazoo, George (Melinda) Cekola of Kalamazoo, Rita Grinsell of California, Rose (John) Osten of California; sister in law, Dee Cekola of Kalamazoo; 17 grandchildren; 17 great-grandchildren; several nieces & nephews.  Esther was a member of St. Joseph Catholic Church. She was a co-owner and operator of the family business Sunnyside Inn in Kalamazoo MI. She took pride in her large family of eight children. She was a kind, loving and outgoing women, who enjoyed being surrounded with family and friends. She had many hobbies including gardening, games, sewing and quilting. She also loved to sing and dance, she was an active member of the "Time Steppers" tap group well into her 80's. She will be greatly missed by all those whose lives she touched. Friends will be received 2-4 & 6-8 pm Thursday September 5, 2019 at Redmond Funeral Home, Kalamazoo where a Rosary will be recited at 7:30 pm. Mass of Christian Burial will be celebrated 11 am Friday at St. Joseph Catholic Church. Interment will be in Mt. Olivet Cemetery. Memorial contributions may be made to St. Joseph Church or Hospice of Southwest Michigan.
To order memorial trees or send flowers to the family in memory of Esther Rose Holmes, please visit our flower store.