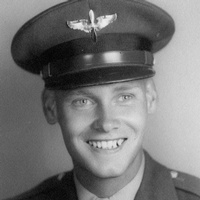 On October 12, 2018, Russ passed peacefully at his home in Kalamazoo following a long battle with Parkinson’s disease and dementia, his family close at hand.  Russ was born January 1, 1924 in Kalamazoo, MI where he resided his entire life. He was the son of Hazel (Howe) and Samuel DeBoer. Following graduation from Kalamazoo Central High School, Russ enlisted in the United States Army Air Corp. He first served as a flight instructor and was posted to the European Theatre where he proudly flew C-47 transports during WWII. After serving his country, Russ attended the University of Michigan from which he graduated with a degree in industrial engineering. Russ spent his entire working career at the Upjohn Company serving in various engineering positions. He oversaw Central Stores and the Apprenticeship Training programs. Prior to starting a family, Russ built his own home which became the family home, and he continued to enjoy wood working throughout this life. Russ’s greatest joy was spending the last 50 summers at the Wall Lake family cottage. He enjoyed fishing, listening to jazz, and sailing with the Wall lake Yacht Club. Russ is survived by his wife Beverly (Bev) of 65 years, sons Kent, and Jeff (Marcia) DeBoer, and daughter Cheryl Baker. His grandchildren, Natalie Baker, Karl (Betsy) DeBoer, and Anna (Matt) Adams brought him endless joy and happiness. He was preceded in death by his parents and siblings. A celebration of Russ’s life will be held at the Parchment United Methodist Church, 225Glendale Blvd, on Thursday, October 18, 2018 with visitation at 9:30 a.m. followed by a service at 11:00 a.m. Following the service friends are invited to join the family in the church social hall for a luncheon. For those so desiring, memorial contributions may be made to the Parkinson’s Disease Research Fund at the University of Michigan, or the charity of your choice. Family would particularly like to thank Russ’s dedicated, reliable, skilled and loving home caregivers, Lou and Lisa, who for the last year helped the family so much. Arrangements by Parchment Redmond Funeral Home, 2300 East "G" Avenue Parchment, MI 49004 (269) 349-7735. www.redmondfuneralhomes.net
To order memorial trees or send flowers to the family in memory of H. Russell DeBoer, please visit our flower store.