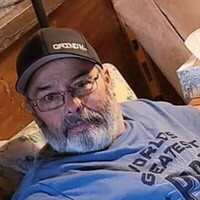 John Lee Whitney 68 of Comstock, Mi. Passed away December 20,2021 at U of M Hospital after long fight with health issues. He was born September 5,1953 in Detroit, Mi., to John H. And Betty (Giroux) Whitney. He is proceeded in death by his father, his brother Thomas, his son John G., his two step sons James and Anthony McCole, and two grandchildren Jordan Head, and Makynzie Perkins. He is survived by his Mother, significant other Dianna Birdsall, his three daughters Danielle, Desiree (Mike) Perkins, and Tiffanie (Chris) Head, brother Ronald, two sisters, Brenda, and Laure. His grandchildren, Zackary, Dj, Mariah, Brittany, Tracy, Michala, Andalyn, Gabby, Michael II, Justin, Tala, and Chloe. His great grandchildren Silas, Benjemen, Charlotte, Sophia, Liam, Ameliana, Maemae, Sage, Teagan, and Rieliegh, and many nieces and nephews. John was a loving father. He was a hard working man. He worked at Mead paper company until they shut down in 2000. He then worked and retired from Burroughs. In his younger years he coached his kids sports teams. Throughout his life he enjoyed bowling, hunting, fishing, camping, riding his motorcycle, and shooting pool. For the last 20 years he was an active member of the American Pool Association. He will be missed by many and was loved dearly. A celebration of life will be held January 8th 2022 at 3:PM at The Lamplighter Inn in Comstock where he spent some of his time shooting pool. Any donations can be sent to U of M hospital in Ann Arbor Michigan or to his Family. www.redmondfuneralhomes.net
To order memorial trees or send flowers to the family in memory of John Lee Whitney, please visit our flower store.