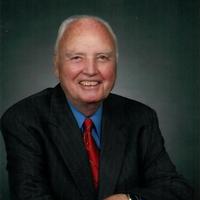 Joseph A. Byrne, Sr. (Joe) was born October 26, 1926 in Detroit, Michigan, the son of Thomas and Margaret (Ahern) Byrne.  He was the fourth of five children and he is the last of his siblings to pass away.  Joe was raised in a strong Irish Catholic environment and remained a man of great faith his entire life, passing his religious values onto his children.  He was a charter member of St. Monica Catholic Church, helping to install tile during its construction and served in the Usher’s Club for many years.   Joe served in the United States Army Air Forces from 1945 to 1947.  He was a Corporal with the Air Forces serving in the Medical Dispensary.  He spent most of his time in Europe as part of the peace keeping forces.  After discharge in 1947 Joe came to Kalamazoo, MI to attend Western Michigan University.  Joe was immediately attracted to the community and had the good fortune to meet the love of his life, Shirley, on a blind date.  He and Shirley were united in marriage October 2, 1948 and went on to have 9 children. Joe worked for Citizens Mutual Insurance Company for 33 years and was a Claims Specialist in the auto and injury accident area.  He retired in 1989.   During his retirement years, Joe and Shirley spent time traveling, playing cards, bowling with friends and visiting their children and grandchildren.  Nothing gave Joe more enjoyment than bragging about his children and grandchildren.  He loved spending hours in his yard and was constantly manicuring it and pondering what he could do next to make it more beautiful.  He was a handyman who could truly fix anything, and all of his children and their spouses relied on his ability and willingness to come to their aid.    After Shirley passed away Joe put his handyman talents to use volunteering through Senior Services as a part of the Tuesday Toolmen.  He and his group received the President’s Volunteer Service Award for their work in the community. They were also recognized by the Governor of Michigan for their contributions.  In addition, Joe volunteered at the Air Zoo working in the restoration hangar restoring aircraft from World War II.  He volunteered at the Air Zoo for 10 years.  Both of the volunteer opportunities were the perfect fit for Joe, providing him the ability to use his talents to help others and give to the community he truly cherished.   Joe was a man of faith.  He was not a worrier and accepted the things he could not change.  He can best be described by the words, “Count your blessings” and “do everything in moderation”.    Joe was preceded in death by his wife, Shirley, and sons Michael and Thomas, sisters Patricia and Margaret and brother Thomas, and special son-in-law Lawrence D. Croxon. He is survived by his children:  Kathryn (Steven) Barry, Susan (Steven) Raymond, Shirley Croxon, Joseph (Patricia) Byrne Jr, William (Kelli) Byrne, Mary (Michael) Harsini, John (Sally) Byrne and 14 grandchildren and 6 great grandchildren, and special nieces and nephews.  Family and friends will be received Monday, June 26 from 6-8 pm at Redmond Funeral Homes 4100 S. Westnedge, Kalamazoo where there will be a visitation with a rosary recited at 7:30 pm.  A Mass of Christian Burial will be celebrated Tuesday, June 27 at 10:30 am at St. Monica Catholic Church.  Interment will be in Mt. Olivet Cemetery.  Memorial contributions may be made to Hackett Catholic Prep High School, St. Monica Catholic Church, Tuesday Toolmen through Senior Services or Kalamazoo Air Zoo Restoration.
To order memorial trees or send flowers to the family in memory of Joseph A. Byrne, Sr., please visit our flower store.