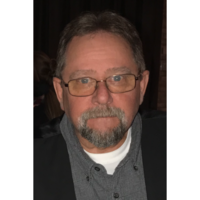 Dale L. Paddock of Kalamazoo passed away January 8, 2021 as a result of a car accident. Dale was born March 23, 1952 in Kalamazoo the son of Donald and Dora (Ashbay) Paddock. He retired from Kalamazoo Hazardous Waste Center. Dale was a musician and enjoyed playing guitar with his musician friends and going out with his buddies fishing and hunting. On June 10, 2006 in Kalamazoo Dale was united in marriage to the former Terri Wilson who survives. Also surviving are two step-children, Adam (Dinah) Weststrate of Grand Ledge, Ashley (Derek) Dusseljee of Paw Paw; four grandchildren, Easton, Everly, Sofia, Oliver; two brothers, Gale (Deb) Paddock, Al Paddock. He was preceded in death by his parents, Donald Paddock and Dora Houvenar and a sister, Fay Copas. Friends will be received 11 am – 4 pm Friday January 15, 2021 at Redmond Funeral Home, Kalamazoo.
To order memorial trees or send flowers to the family in memory of Dale L. Paddock, please visit our flower store.