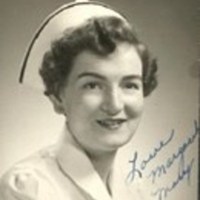 Mosher, Margaret Mary (McAlear), age 85, of Flushing, formerly of Bay City and Kalamazoo Michigan, died Tuesday, October 8, 2019 at her home. Funeral Mass will be at 11:00 a.m. Tuesday , October 15 at St. Joseph Catholic Church in Kalamazoo. Visitation will be at the church on Tuesday from 10:00 a.m. until the time of Mass at 11:00 a.m. Lunch will follow at 12:15 in the Bennett Building. Internment at 2:00 p.m. in Mt. Olivet Catholic Cemetery. If desired, memorial contributions may be made to St. Luke N.E.W. Life Center Flint Michigan. Margaret Mary was born in Highland Park, Michigan on September 18, 1934 to Charles and Margaret McAlear. She was a graduate of St. Mary High School and earned her nursing degree from Mercy School of Nursing. She married Ara Mosher on June 22, 1957 Margaret Mary was a Master Gardener and the best knitter we ever knew. She could sew and smock beautifully. And she baked a mighty tasty apple pie. NYT crossword puzzles were rarely a match for her. She worked for decades as a nurse and then in retirement put in long hours as a volunteer at a homeless day shelter. She didn’t give a fig how the world judged someone or something. She loved by her own rules. Margaret Mary is survived by her children,Mary (Brendan) Henehan, Andrew (Anny) Mosher, Ruthanne Mosher, Rosellen (John Lono) Mosher, and Peggy Mosher; daughter-in-law Roberta Mosher; grandchildren, Margaret Rose Henehan, Lillian Henehan, and Sarah Mosher; siblings, John McAlear, Rosellen McAlear, Robert ( Cindy) McAlear; sister-in-law, Robin McAlear; special cousin, William Gannon and family and several nieces and nephews. She was preceded in death by her husband, Ara Mosher; son. Matthew Mosher; and brother, Andrew McAlear. Special thanks to Kindred Hospice, Hurley Medical Center, and Dr. Kiran .
To order memorial trees or send flowers to the family in memory of Margaret Mary Mosher, please visit our flower store.