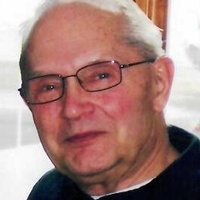 Maurice James MacCartny of Portage, passed away at Upjohn Heritage Rehab Center on Friday, September 21, 2018. Maurice was born in Chicago, Illinois on September 9, 1932 the son of Henry James and Annice (Brown) MacCartny. He held a Bachelor’s degree in science from Western Michigan University and was drafted into the U.S. Navy in 1955 being Honorably Discharged in 1961. During his career he worked for Chrysler and laster retired from W.L. Molding after 51 years of service. He was active as a Sunday School teacher and board member. He was a coordinator for lay witness missions throughout the midwest for many years. On June 4, 1960 Maurice was united in marriage to the former Carol A. Robart who survives. Also surviving are his children: sons, Douglas of Kalamazoo, Paul of Portage, and Brian (Naomi) MacCartny of Allegan, and daughters; Sharri Sackett of Portage, and Allison (Gabriel) Shockley of Mattawan. He is survived by 12 grandchildren and 9 great-grandchildren who loved him dearly and enjoyed many special handshakes with him. He also helped raise 13 foster children. He is also survived by several nieces and nephews and special friends in his Sunday School class. Friends will be received Tuesday, September 25, 2018 from 1:00 to 2:00 pm with services to follow at 2:00 pm at Cross Community Church of the Nazarene located at 5625 Oakland Dr. Portage, MI  49024. A private interment will be held at Evergreen Cemetery, Bloomingdale at a later time. Memorial contributions may be given to either the Kalamazoo Area Renal Support Group (KARS) or The Chapman Memorial Church of the Nazarene in Vicksburg, MI. Arrangements made by Redmond Funeral Home 4100 S. Westnedge Ave. Kalamazoo, MI  49008 www.redmondfuneralhome.net
To order memorial trees or send flowers to the family in memory of Maurice James MacCartny, please visit our flower store.

Cross Community Church of the Nazarene

Cross Community Church of the Nazarene