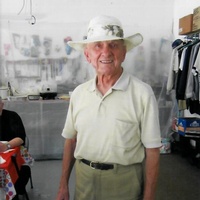 Michael passed away on July 19, 2017. He was born in Wisnicz, Poland on February 26, 1924 the son of Antony and Antonina Baranski. As a youngster in 1940, he was sent to a farm in Germany as a laborer in place of his step-father.  He joined approximately 5 million others in forced labor in the German farm system.  While at the farm, he met and married Kay Skalski – the mother of his three children.  Daughters Maria and Christine were born in 1944 and 1946. From the war’s end in 1945 until early 1949, he worked for the US Military.  Later in 1949, the family immigrated via boat from Tripoli, Italy to Halifax, Nova Scotia, Canada and settled down in Cadillac, Quebec, Canada.  In 1951, his son Chester was born.  While in Canada, he worked at a gold mine waiting for his opportunity to immigrate with the family to America – his life long dream.  On January 31, 1955 that dream became reality and the family moved to Paw Paw, Michigan.  He was employed by Southerland Paper Company and later retired from Georgia Pacific. At that time, he opened “Ports of Call” Party Store in Mattawan which he ran from 1973 until 1981. He was a member of St. Monica Catholic Church and the Knights of Columbus # 2135 in Otsego. He also belonged to the American Legion Post #0068  in Paw Paw and was active in the Polish National Alliance until the local chapter closed.  He was preceded in death by 2 brothers and 2 sisters in Poland. Mike is survived by his wife Irene Pacula, children: MariaKowalik of Portage, Christine (Mark) Cato of Kalamazoo and Chester (Nancy) Baranski of Mattawan, 5 grandchildren: Debbie Kowalik, Tracy (Jay) Sibley, John Kowalik, Steve (Sara) Schultz, Joshua (Kelli) Baranski, 7 great-grandchildren: Cole, Abby, Riley, Ava, Lexi, Carson and Olivia, step children Richard (Chris) Pacula, Sue (Jim) Olsen, Angela Crocker, VictorPacula and Joseph (Caroline) Pacula, special niece Regina (Ray) Malinowski and several nieces and nephews in Detroit, Chicago, Canada and Poland. Friends will be received atRedmond Funeral Home Sunday July 23, 2017 from 4 until 8pm with the rosary being recited at 7 pm.  Funeral Mass will be celebrated at 11:00 am Monday July 24, 2017 at St. Monica Catholic Church with Fr. Robert Consani as Celebrant. Entombment will be at Mt. Ever – Rest Memorial Park. Memorials may be made to: St. Monica Church, Kairos Dwelling or the Knightsof Columbus in Otsego.
To order memorial trees or send flowers to the family in memory of Michael Baranski, please visit our flower store.