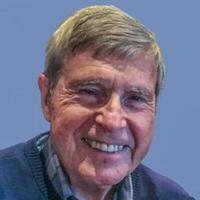 Dr. Otto Ivan Linet passed away peacefully on September 26, 2021, at Friendship Village, in Kalamazoo. Otto was born on April 21, 1934, in Prague, Czechoslovakia, the only son of Voytec and Maria Linet. Otto was a family doctor at the Ministry of Health in Prague prior to escaping his communist-run homeland and moving to the country of his dreams, the United States. He came to Detroit with his wife Hana in 1972 for his US residency at Mt. Sinai hospital. After completing his residency, he was offered a job at Upjohn Company as a pharmacology researcher, and he and his wife moved to Kalamazoo, Michigan. At Upjohn, Otto was a Director of Medical Research. His unit was instrumental in bringing to the market several pharmaceuticals or purchased by Upjohn Company. He worked there for 25 years before retiring. Then, after a short retirement break (six months), he went back to do pharmacology research at the Jasper Clinic. He stopped working at the clinic at the age of eighty. Otto loved his job because it gave him the opportunity to improve the health of many patients. His managerial position required extensive international travel world, which is also enjoyed. He was an avid hunter, fisherman, gardener, and loved nature. He was a true weekend warrior when it came to the outdoors. He was a joyful musician playing the guitar and piano, though he was extremely modest about his talents. He was a true gentleman: a charming, compassionate, and sincere man. Anyone who met him was touched by his presence. His laughter and his humor brought joy to all. He will be dearly missed. Surviving are his daughter Michelle H. Linet, and his grandchildren Nathan and Zanah Rind, and his special friend of his last years, Marge Faber. In accordance with his wishes, cremation has taken place. A memorial mass will be celebrated at St. Monica’s November 6, 2021, at 11 am. After the mass, please join us for a toast at Bell’s Brewery immediately after the service. In lieu of flowers please send donations to the Dementia Society of America or Southwest Michigan Hospice.
To order memorial trees or send flowers to the family in memory of Otto Linet, please visit our flower store.