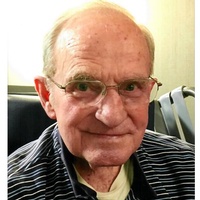 Paul VanderBor of Portage passed away Tuesday, April 3 at Upjohn Nursing Home at age 83, after a long battle with Parkinson’s Disease. He was born April 8, 1934 in Kalamazoo, the fourth of eight children to Bert and Jacoba VanderBor. He was a veteran of the United States Army. He retired as a truck driver after many years of service with Suburban Motor Freight and Yellow Freight Lines. On April 7, 1956 he was united in marriage to Sandra Grogg, who preceded him in death October of 2007. He was also preceded in death by brother Hank and his wife Betty VanderBor, sister Alice Parker and Jim and Art VanderBor. Paul is survived by daughter Therese (Mark) Krajewski, sons Thomas VanderBor and Timothy (Tanya) VanderBor, grandchildren Karen Krajewski and Jared and Ryan VanderBor, sisters Nellie Peterson and Pauline Houtkooper, brother Ed (Barb) VanderBor, sister-in-law Geraldine VanderBor, uncle Gerritt DeGraaf, special niece Diane Hettinger, and several cousins, nieces, nephews, and dear friends. Visitation will be held on Friday, April 6, 2018 from 4:00-8:00 pm at Redmond Funeral Home. Services will be held Saturday, April 7, 2018 at 11:00 am at Redmond Funeral Home. Internment to follow at Mt. Ever-Rest Cemetery. Memorial contributions may be made to Hospice Care of Southwest Michigan or St. Joseph Catholic Church.

To order memorial trees or send flowers to the family in memory of Paul VanderBor, please visit our flower store.