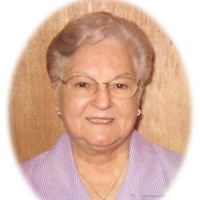 The Sisters of St. Joseph request your prayers for          SISTER PAULINE STARNER, CSJ                              Who entered into eternal life on August 25, 2019      Welcome Home and Rosary on Wednesday, August 28, at 3:40pm             Vigil Service on Wednesday, August 28, at 7:00pm      Mass of Christian Burial on Thursday, August 29, at 10:30am                     All services in the new center located at              2929 Nazareth Road, Kalamazoo, Michigan   Pauline Starner was born in Detroit, Michigan on July 21, 1928, the daughter of Bernard and Blanche (Gorny) Starner.  She was a member of St. Rita’s Parish in Detroit at the time of her entrance into the Congregation of the Sisters of St. Joseph of Nazareth on January 2, 1947.    She received the name Sister Naomi at her reception on July 2, 1947, pronounced first vows   on July 2, 1949 and final vows on July 2, 1952.   Sister Pauline attended Nazareth College and received her Bachelor of Science Degree in August, 1962 with a degree in Business Education.  She went on to the University of Detroit and received her Master’s degree also in Business Education.    Sister Pauline began teaching at St. Benedict’s in Highland Park, Michigan.  She also taught  at St. John Vianney and St. Mary’s in Flint, St. Joseph in Battle Creek, and St. Patrick in Portland, Michigan.  However, the majority of her ministry in teaching was in the Archdiocese of Detroit, including 15 years at Aquinas High School in Southgate, as a business teacher, counselor and substitute teacher.  Sister Pauline was also the Director of Religious Education/Parish Ministry at St. Cletus Parish and taught religious education at St. Edmund, St. Sylvester and St. Anne, all in Warren, Michigan.   In March, 2011 Sister Pauline moved to Nazareth Center and soon transferred to Borgess Gardens.  She maintained her love of nature and quoting Gerard Manley Hopkins, reveled in “the world charged with the grandeur of God.”  Everyone who knew her enjoyed her sense of humor and tales of her teaching days. Even as her memory failed, Sr. Pauline continued to demonstrate a sharp wit in her interactions with others. She worked hard, played often, and laughed readily. May She Rest In Peace!
To order memorial trees or send flowers to the family in memory of Sr. Pauline Starner, CSJ, please visit our flower store.