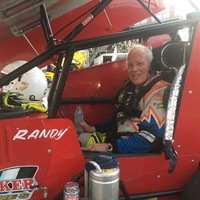 Randall J. Sweet of Kalamazoo passed away Friday, November 8, 2019, at home. Randy was born December 24, 1946, in Grand Rapids the son of Donald and Alice (Moomey) Sweet. He was united in marriage in July 2017 to the former Sherry Lough who preceded him in death on April 14, 2019.  Also preceding him in death was a son, Trent Sweet; father Donald Sweet; step-father, Ivan Blume; two sisters, Carol Sweet and Virginia Sweet., Surviving are his son Troy Sweet of Kalamazoo; mother, Alice Blume of Port Charlotte, FL; brother, Steve (Lori) Sweet of Cortez, CO; sisters, Shelly (Merle) Caswell of Port Charlotte, FL, Elaine (Lon) Rutter of Elkhart, IN; several nieces & nephews. Randy was a member of Texas Corners Bible Church. He was a legendary innovator in the racing sport, but just as well-known for a time as a driver in his own right, with four late model track championships at Michigan’s Berlin Raceway (1975, ’94, ’95, ’99) and 63 late model feature victories at seven-sixteenths-mile oval. He began racing in 1963 and moved into supermodifieds late in the decade, all while developing and building his own race cars. The dawn of the 1970's saw Sweet step into the seat for car owners Glenn Minat and Harry Obie, setting a track record at Indiana’s Winchester Speedway in 1978. It was the same year that Sweet began manufacturing and selling products that he had tested and proven on his own machines already, debuting the Sweet Manufacturing brand which still exist today and supplies parts to stock cars and sprint cars across the nation. The mid-1990’s saw Sweet begin touring in his legendary “rocket car,” a purpose-built late model created for the purpose of shattering track records across the nation. Sweet turned his final laps in a sprint car at Kalamazoo (Mich.) Speedway on July 21, 2013, while his last racing laps of any kind came at berlin three years ago. A 1997 inductee into the Michigan Motorsports Hall of Fame, Sweet was inducted into the Berlin Raceway Hall of fame on November 1, 2019, a well-deserved honor for one of the kings of the Marne Facility. Friends are being received 2-4 & 6-8 pm Thursday, November 14, 2019, at Redmond Funeral Home, 4100 S. Westnedge Ave. Kalamazoo, MI 49008 (269) 343-6156 and 10- 11 am Friday at Texas Corners Bible Church where services will follow at 11 am. Entombment will be in Mt. Ever-Rest Cemetery. Memorial contributions may be made to Wounded Warrior Project 4899 Belfort Rd Suite 300 Jacksonville, FL 32256. www.redmondfuneralhomes.net
To order memorial trees or send flowers to the family in memory of Randall Jay Sweet, please visit our flower store.