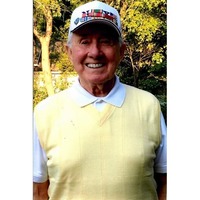 Robert Carl Kiefer passed away Saturday, October 19, 2019 at home surrounded by his family. He was born on December 23, 1924 in Sharon, PA to Julia and Paul Kiefer. Bob was a disabled Vet having served in WWII after joining the Navy Air Corp in 1942. He was the flight director on the USS Wake Island and saw action in both the Atlantic and Pacific Theaters. He was joined in marriage to Helen E. Edell in 1947. After the war he attended the University of Cincinnati on the GI  bill and received his bachelors of Architecture where he met his friend and future business partner. Together they formed Kellogg and Kiefer Architects. Bob later had his own practice Robert C. Kiefer, Architect. He and Helen made their home on Gull Lake for many years where they enjoyed the lake life while remodeling their house from the ground up. Gull Lake is also where he discovered his love of golf. He played many rounds of golf around the Gull Lake area, in South Haven, and eventually in Florida where he and Helen had a condo for over 20 years. After moving back to the fountains in Kalamazoo he logged many happy hours swimming laps at the BAC. He was preceded in death by his Three Brothers, Paul, Albert, and Jack, Their Spouses, his Parents and Numerous Nieces and nephews. He is survived by his loving wife of 72 years, His daughter; Robin (Marc) Rose, Two Grandsons; Joseph Rose of San Diego, Peter (Kelly) Rose of Kalamazoo, His Great Granddaughter Leona Millie, Nieces, Nephews, and his many wonderful friends at the Fountains. Helen and Robin would like the thank Bob’s wonderful Doctor, Stephen Dallas, and Southern Care Hospice for their wonderful care and compassion during this journey. Please join the family for a light meal and reminiscing on Monday, October 28, 2019 from 4-6 at Redmond Funeral Home on Westnedge. A military burial will take place this summer at Ft.Custer. In lieu of flowers donations may be made to St. Jude’s Children’s Hospital and Southern Care Hospice. Arrangement’s made by Redmond Funeral Home 4100 S. Westnedge Ave, Kalamazoo, MI 49008
To order memorial trees or send flowers to the family in memory of Robert "Bob" Carl Kiefer, please visit our flower store.