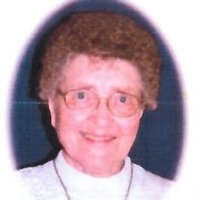 SISTER DOROTHY ANN GALL, CSJ Who entered into eternal life on Thursday, November 15, 2018 Welcome Home and Rosary on Sunday, November 18 at 3:45pm  Vigil Service on Sunday, November 18 at 7:00pm Mass of Christian Burial on Monday, November 19 at 10:30am  All Services in Holy Family Chapel, Nazareth, Michigan Dorothy Ann Gall was born in Tipton, Indiana on July 26, 1921, the second oldest of 10 children born to Albert and Lillian (Peters) Gall.  Dorothy was a member of St. John’s Parish in Tipton at the time of her entrance into the Congregation of the Sisters of St. Joseph of Tipton on December 26, 1940.  She received the name Sister Aloysia at her reception on July 2, 1941, later returning to her baptismal name.  She pronounced first vows on July 2, 1943 and final vows on July 2, 1946. Sister Dorothy experienced the call to become a nurse and to that end, she graduated from Good Samaritan School of Nursing in Kokomo, Indiana.   After two years serving at Mercy Hospital, Elwood, Indiana, Dorothy attended St. Mary College, Notre Dame, IN, where she earned a B.S. in Nursing.  For the next 17 years, Sister Dorothy instructed nursing students in the Holy Cross School of Nursing at St. Joseph Hospital, Kokomo, Indiana.  From Kokomo, Dorothy joined the nursing staff at St. Charles Hospital, Bend, Oregon and two years later, she returned to Indiana University/Purdue University, Indianapolis, Indiana, to earn her M.S. in Nursing at Indiana University School of Nursing in Indianapolis.  Later still, after practicing nursing, Dorothy took part in a Home Health Residency program in Indianapolis, IN that led her to being a Visiting/Public Health Nurse in New Castle, IN., to provide nursing care to the sick and shut-ins.  From there, Dorothy felt called to assist in the nursing care at her own community’s infirmary in St. Joseph Center, Tipton.  During that time Dorothy became active in the Tipton Ministerial Association and became the first Administrator of the group’s newly founded ministry, Mustard Seed.  The purpose of that Agency is to “teach people to fish, rather than give them fish.”  This ministry was a high light in Dorothy’s life, though she seemed to love each ministry in which she was involved.Sister Dorothy was given a sabbatical opportunity in Arnprior, Ontario, Canada and Nova Noda in Nova Scotia, an experience she cherished the rest of her life.  Perhaps that was an unknown preparation for her 4 year term as President of the Tipton Sisters of St. Joseph. Following that ministry, Dorothy lived at the Tipton Center where, among other things, she was active as the Sister Director of the Tipton Associate Program, into her 90’s, as well as being a Mission Circle designee on the Congregation’s Coordinating Circle.In November, 2012, Sister Dorothy, with her usual trust in Divine Providence, moved from her loved home in St. Joseph Center, Tipton, to another home, Nazareth Center in Kalamazoo, Michigan.Sister Dorothy’s sense of dedication, loyalty and love of learning, remained throughout her life as a Sister of St. Joseph and the various ministries in which she served.  Dorothy’s quiet and gentle manner endeared her to those whose lives she touched.                                                                       May She Rest In Peace!
To order memorial trees or send flowers to the family in memory of Sister Dorothy Ann Gall, CSJ, please visit our flower store.