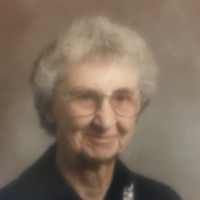 Thelma Pauline Reinoehl Ickes Harrison was born November 15, 1916 on a farm in Constantine, Michigan. She was the third child of Silvanus and Elma Reinoehl. When she was eleven years old they moved to Schoolcraft, Michigan. She married Raymond Ickes on August 22, 1936. He was an award winning farmer. They had two daughters, Beverly and Vivian. Raymond and Thelma were Sky- Watchers during the Second World War. They were leaders in 4H for a number of years, involved in The Farm Bureau and Schoolcraft Grange. During those years they attended the Methodist church. Raymond passed away in November 1962 at age 49. Thelma married William Harrison on June 18, 1971. He died from injuries due to an auto accident. They were married 23 years. Thelma worked at Arco Manufacturing Co. and Western Michigan University retiring in 1981. Her health began to decline and she lived at Riverview Manor in Three Rivers in 2014. Her niece, Barbara Walsh invited her into her home and she was her caregiver until August 2015 when Thelma moved to the Heritage facility in Kalamazoo. She had been on Hospice for only a week when she passed away in her sleep on October 7, 2019. Thelma is survived by her daughter, Beverly and her husband, Phillip Ramsdell. Also, by her daughter Vivian Thompson. Also, six grandchildren, Melanie Gillette, Mark Ramsdell, Troy Peters, Michele Peters, Lance Peters and Nicole Clark and a number of great grandchildren. She is also survived by two nephews and five nieces. Thelma is preceded in death by her parents, her brother, Willard Reinoehl and his wife Berniece, her sisters, Esther Horn and Erma Pepperman Martin and their husbands, and two granddaughters, Stephanie Peters and Marcia Ramsdell. Thelma would have been 103 years of age in a few weeks.
To order memorial trees or send flowers to the family in memory of Thelma Pauline Harrison, please visit our flower store.