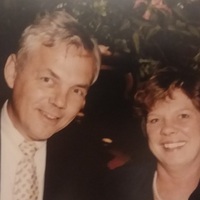 Thomas Biber died in Sarasota Florida on Friday, July 31, 2020. He was the son of Walter and Frances Biber. He is survived by many loving family members, including his siblings Mike and Walter Biber and Mary Scapatticci as well as his step children Michael Kosanke, Laurie Jackson and Julie Schnooberger, grandchildren, cousins, nieces, and nephews. Tom was born in Jackson, Michigan in 1946 and moved with his family to Kalamazoo, Michigan when his father Walter became the head pro at Kalamazoo Country Club in 1951. In his younger years, his life and character was formed by attending St. Joseph elementary school. The entire family was influenced by the Church and the Nuns. Tom became an accomplished amateur golfer during his younger years, by enjoying the benefits of the Kalamazoo Country Club and its Members. Tom won the KCC Junior Invitational, with his longtime friend, Tom Schwartz. Tom attended Hackett High School and graduated in 1965. He attended junior college for several years but then was drafted in Into the United States Army -- One of his more memorable and satisfying times, surprising to many, was basic training and his time in Germany. Advance through the Army ranks, he became responsible for much of the personnel decisions being made at the German bases. Upon his return to the United States he became involved in the golf business, following in the footsteps of his father. He became the head golf professional at Klinger Lake Country Club. In the 1970's, he acquired Ridgeview Golf Course, along with his partner and friend Tom Gauntlett. The Biber family has operated it since then. Tom married the love of his life, Lorraine, in 1980. Tom loved to 'dote' on her. Lorraine work closely with Tom in the operation of the golf course until her unfortunate death. Tom moved to Florida for the last years of his life. During that time he was active at Incarnation Church and cared for his Mother, Frances. During that time, he fondly and frequently remembered his growing up in Kalamazoo with his family and his lovely wife Lorraine and her family. During Tom's long and final illness he enjoyed being with his family as often as possible. “Eating out" and going for drives were some of his favorite things. Tom will be buried at Mt. Olivet cemetery next to his parents and wife. There will be a funeral mass at St Augustine on Thursday, August 6, 2020, at 10:30 a.m. preceded by a Rosary at Redmond Funeral Home on Wednesday beginning at 6:00 p.m. May God Bless him and may he rest in peace.
To order memorial trees or send flowers to the family in memory of Thomas Walter Biber, please visit our flower store.