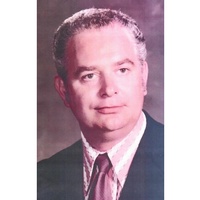 Thomas Maurice Hill Sr. passed away on Friday December 8, 2017 surrounded by his family.  Tom was born on March 25, 1929 to Lawrence Lillis and Theresa Grace (Billiter) Hill in St. Joseph, Missouri.  Tom was the youngest of 7 children and last surviving sibling.  Tom moved to Kalamazoo in 1943 at age 14 and graduated from St. Augustine High School.  After high school Tom attended The University of Detroit and studied engineering.  When his father became ill Tom started to assist his father selling for Hillyard Chemical Company in Southwestern Michigan and Northern Indiana and continued selling to support his mother when his father passed away at the age of 52.  His selling career was put on hold to serve in the military from age 24-26.  After an honorable discharge from the military Tom resumed working for Hillyard as a District Manager until his retirement in 1994.  Tom was an accomplished salesperson receiving numerous awards and leading the company in sales for 12 years and built the largest territory volume in the country.  In 1987 Tom and his son Tom Jr. purchased Kalamazoo Sanitary Supply Co. now known as KSS Enterprises where Tom continued to work and consult for the next 8 years retiring a second time from the industry he truly loved. Tom met the love of his life Shirley Ann Kondratek and they were united in marriage on June 9, 1956.  Tom and Shirley had 61 wonderful years together and raised 4 children.  Tom was a founding member of St. Monica Church and a member of St. Basil Church in South Haven.   He loved to golf, swim, spend summers in South Haven and helped coach power lifting with his son Steve a Special Olympian.  Tom and Shirley were able to attend the International Special Olympic Games in Dublin, Ireland to watch Steve compete in power lifting in 2003.  Tom was an avid Notre Dame Football fan, and enjoyed Detroit Tigers baseball and the Detroit Lions. Tom served on numerous boards including ARC and Shalom was a Knights of Columbus member and usher at St. Monica Church. Tom always enjoyed being around family and friends and was a great person to simply talk to as he provided great guidance and wisdom.  Tom was a man of strong faith; he would always greet you with a smile, handshake or bear hug.  He had a wonderful sense of humor and made you feel loved and welcomed in his presence.  Always positive, he had a knack of "Telling it like it is" with his one liners. He was preceded in death by his son Stevie; sisters Margaret, Dorothy, Jean and Shirley and brothers Bill and Bob.  He is survived by his wife Shirley, daughter Holly (Greg) Daggett, son Tom Jr. (Pat), daughter Terry (Bill) Dawson and 10 grandchildren and 5 great grandchildren and many nieces & nephews. Visitation will be held 2-4 and 6-8 PM on December 17, 2017, with a Rosary being recited at 7:30 PM, at Redmond Funeral Home in Kalamazoo, MI. A Mass of Christian Burial will be held at 10:30 AM, December 18, 2017 at St. Monica Catholic Church. Memorial Contributions may be made to Hospice of SW Michigan, St. Monica Church or Residential Opportunities Inc. (ROI).
To order memorial trees or send flowers to the family in memory of Thomas Maurice Hill Sr., please visit our flower store.