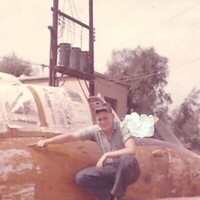 Thomas J. Wilder Kalamazoo, MI Thomas James Wilder (Tom) was born April 24th 1944 at Borgess Hospital, Kalamazoo, MI, the son of the late Bernard W. Wilder and Olive E. (Schram) Wilder. At a young age, Tom was always interested in big trucks and equipment. After high school in Kalamazoo, he enlisted in the Navy in 1961 and served as a sea bee with MCB 7 until his honorable discharge in 1965, serving in Morocco, Cuba and the Virgin Islands. Returning to Kalamazoo, he took some classes at Western Michigan University. He met and married Kay Crawford-Merriam in 1966. They lived most of their life in the Kalamazoo area. She was his best friend, a mom, and grandmother. Tom was for many years a truck driver and mechanic. He took pride in the fact he had seen all 48 states, except Alaska and Hawaii. He had many safe driving awards. He retired in 2002. After a year of that got bored and went to work at The Fountains as groundskeeper for some 10 yrs., retiring in 2014 with a dream of visiting Alaska by motor car. Tom was preceded in death by his parents, Bernard and Olive; wife, Kay; brothers Bernard J. Wilder and Stephen J. Wilder; sister Mary E. Wilder. He is survived by a sister, Theresa (Joseph) Wilder-Baker, a Step-Daughter Debbie Cherry, a Granddaughter, Nicole (Derek) Marlowe, and a Great-Grandchildren, Jaxon, Cole & Claire Marlowe; many friends, nephews & nieces. Memorials can be made to St. Joseph Church or the charity of your choosing.
To order memorial trees or send flowers to the family in memory of Thomas James Wilder, please visit our flower store.