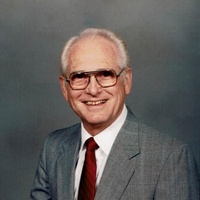 Wesley C. Hubbard of Portage passed away Saturday, February 23, 2019 at StoryPoint Assisted Living, in Portage, MI. Wesley was born January 4, 1930 in Sault Ste. Marie, the son of Rev. Walter and Flora (Endersbe) Hubbard. He was veteran of the Korean War serving in the Air Force and was a graduate of Michigan State University. On October 20, 1951, in Wayne, MI, Wesley was united in marriage to the former Roxie Ramsby who preceded him in death on October 27, 2018.   He was a member of the Hillsdale and Portage Free Methodist Churches and active with the Gideons International. Wesley retired from Sears & Roebuck Co. He loved to play with his grandchildren, travel, watch the Detroit Tigers and the MSU Spartans. Wesley loved serving in his church and always had a great sense of humor.  Also preceding him were three sisters; Edna Moore, Elizabeth McCool-Calhoon, Geneva McIntyre and a brother, Rev. Dr. Walter Hubbard. Surviving are three children; Christine (Michael) Palmer of Orlando, FL, Mark (Pamela) Hubbard of Portage, and Gary (Sonja) Hubbard of Portage. Also surviving are 12 grandchildren, six great-grandchildren and several nieces & nephews. Friends will be received 12-1 pm Thursday, February 28, 2019 at Redmond Funeral Home, 4100 S. Westnedge Ave., Kalamazoo, MI 49008. Memorials may be made to the charity of the donor’s choice. Military honor’s by Otsego VFW Post #3030 and the U.S. Air Force. www.redmondfuneralhomes.net
To order memorial trees or send flowers to the family in memory of Wesley Carlton Hubbard, please visit our flower store.