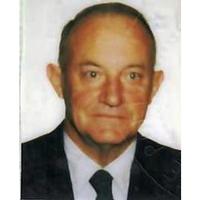 William J. Larsen of Kalamazoo Bill died May 19, 2017. He was born in Waterman, Illinois on June 11, 1925, the son of Harry and Lillian (Reindgart) Larsen. He was a graduate of Western Michigan University. He was Corporate Safety Director at SCM Corporation for many years. After retiring, he opened his own Private Investigation Service called William J. Larsen and Associates. He is a veteran of WWII having served in the Marine Corps. Bill was the marine chosen to be part of President Franklin Roosevelt's Honor Guard at his funeral. On February 23, 2010 he was preceded in death by his wife Ann (Holdship) Larsen whom he married July 26, 1945. William is survived by his daughter: Barbara (Paul) Adams of Kalamazoo, 1 granddaughter: Christina Adams. Friends will be received Saturday May 27, 2017 from 1 until 2 pm. at St. Luke's Episcopal Church, 247 West Lovell, where funeral services will be held at 2 pm, Father Randall Warren officiating. Refreshments will be served at St. Luke's immediately following the service. Memorials may be made to St. Luke's Episcopal Church or the American Diabetes Association. Arrangements by Redmond Funeral Home, 4100 S. Westnedge Ave. Kalamazoo, MI 49008 (269) 343-6156. www.redmondfuneralhomes.net
To order memorial trees or send flowers to the family in memory of William J. Larsen, please visit our flower store.